BLAB. Creative Candy for the Eyes, Ears and the Northern Soul 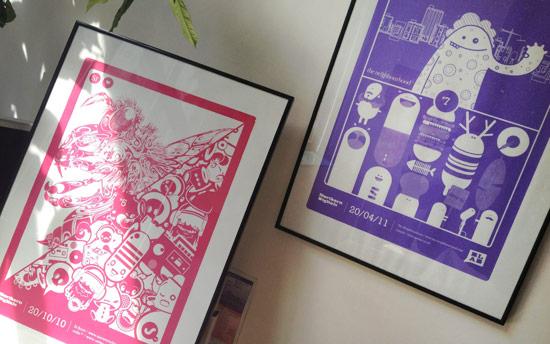 Some years back now the talented Mr Matt Booth started a little get together of friends in the digital community in Manchester's Northern Quarter. It was a relaxed affair that soon began to gain quite a following and provided an excellent opportunity for creatives of all backgrounds to get together for a drink and a chat about what was going on, to share a little common knowledge and inspiration. It wasn't long before numbers grew and quite a community had formed; the evenings, held on the first Thursday of every month became known as Northern Digitals and are still going strong.

With so much creative knowledge crammed into one venue (well a few now- having started at Socio Rehab before growing into The Northern and now Cafe Bar Barcelona), naturally people were keen to talk about and share some of their exciting work, sources of inspiration and influences. Manchester's creative community embraced the event and it grew in popularity very quickly. It was at this point Matt decided to expand the operation and branch out with the BLAB nights making the decision to invite guest speakers.

With Northern Digitals offering the opportunity for a laid back creative networking meet up on a monthly basis, BLAB nights were born and grew up into the older brother; held in bigger venues; the super cool Deaf Institute and most recently Band on The Wall, they are entirely geared towards getting some of the world's finest creatives, designers, illustrators, digital folk and much more to speak about their work, what inspires them and anything in between. Having been lucky enough to have been to them all over the last two years I've witnessed some seriously awesome talks and work. The last one being number ten, a milestone of sorts hosted Vaughan Oliver and Peter Saville; the latter holding a very interesting Q&A session. It was a fantastic event that not only invigorated, but challenged too.

Not only have those attending witnessed great artists including Airside, The Neighbourhood, Us Two, Mr Bingo to name but a few, but the event itself has become a creative hub and meeting place for catching up with fellow peers and friends.

One final perk to this awesome event is the obligatory poster created by the speakers and distributed to all attendees. My only issue now is I may need a bigger flat to accommodate them all as we reach double figures.

If you've missed any of the BLAB nights or are interested in finding out a bit more they are recorded (link below) so if you're looking for some galvanising creative eye candy and interesting blabbering they come very highly recommended. With so many to choose from I'd be tempted to start at Mr Bingo; if he couldn't draw so well he'd make a good stand up...